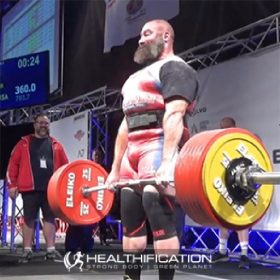 Plant friends this is first in a series of episodes focused on athletes representing PlantBuilt a collective of vegan athletes with the goal to “demonstrate that athletes can be competitive and compassionate at the highest level of sports fuelled solely by plants.”

That’s a quote from Giacomo Marchese, PlantBuilt co-founder who I chatted with back in E758.

Working in conjunction with team Plantbuilt is Vegan Strong, another team of athletes dedicated to educating fitness enthusiasts about the benefits of plant-based eating to meet fitness goals.

The Vegan PlantBuilt Team powered by Vegan Strong of 28 athletes plans to dominate at Mr. America Competition this October in the sports of Bodybuilding, Olympic Weightlifting, Powerlifting, Kettlebell Sport and CrossFit.

These sports have traditionally been won by omnivore athletes… however times are changing and I’m here for it!

This conversation with Masters World Champion Powerlifter and Ethical Vegan Ryan Stills is NOT just for those of us who love to lift!

Ryan, is so much more than a gent fuelled by plants that can lift massive weights!

Though his current max lifts are super impressive:

At 45 years old and in his 30th year of competing Ryan is still making gains.

We don’t spend our time talking about heavy weights and plant-based deliciousness though. I wanted to go deeper and Ryan was a gracious and generous guest. We discuss ego, judgement, mental strength, dealing with injury, traveling as a vegan athlete and so much more.

If anyone in your life still needs proof that there are vegan athletes excelling in every sport fuelled purely by plants then this is a show to share with them!

However I feel like this conversation was also about, never giving up on something that is important to you and aligned with your beliefs.

Letting go of the self judgement that might make you feel you’ve failed at something in the past and just trying again, ideally with a better strategy and with support from those who have gone before you. That’s what Ryan did after first struggling to eliminate animal products.

As a well known athlete he could reach out to other vegan athletes however wherever you are, whatever your goal, or level of fitness, I think you’ll be pleasantly surprised when you reach out for support on how to live a healthy vegan lifestyle.

That’s what this podcast and of course both plantbuilt.com and veganstrong.com are here for.

I’ve got plenty of links to previous plant powered podcast guests excelling in their chosen sport and other resources in the show notes below.

I don’t want another sentient being to suffer or die for me to exist. Once I came to the determination that I could not allow myself to have excuses as to why I couldn’t do this, I vowed to find a way to do it. And I have. @RyanJStills Click To Tweet

If you liked “Masters World Champion Powerlifter and Ethical Vegan Ryan Stills.” you’ll also like Hench Herbivore, Ex-Vegans and Being On The Right Side Of History.

If you liked “Masters World Champion Powerlifter and Ethical Vegan Ryan Stills.” you’ll also like E644: Torre Washington and Thriving On Plants as a Vegan Bodybuilder.

If you liked “Masters World Champion Powerlifter and Ethical Vegan Ryan Stills.” you’ll also like Prior Marine Korin Sutton on True Strength and Getting Shredded As A Vegan.