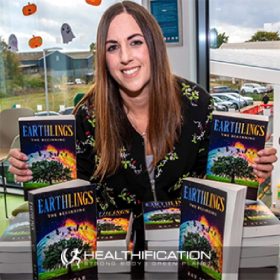 Earthlings is book one of a young adult fantasy trilogy. It was published in 2021 and has gone on to win the Environmental Excellence Award with Essex Business Awards, Book of the Year with Betty’s Bookshop and a Vegan’s Choice Award.

The sequel, Dominion, is eagerly awaited by ME and many other readers. It is due for release in November 2022.

To set the scene, this trilogy plays out in a world where speciesism is reversed.

The animals are in power now. Chickens and cows mainly. After the Changing, the herbivores had the numbers to revolt.

To quote the novel: “Carnivores may be stronger, but they don’t have the numbers to rule.”

Insightful, terrifying truths like this are sprinkled throughout Earthlings. Ray manages to incorporate so much of what we do to animals. Now in reverse. As young Peridot our magick born protagonist express’s to her loyal dog friend Phoenix: “It’s as if the realities of the mainland are normality and I’m strange to be horrified by it.”

Vegan friends I know you can relate to being utterly horrified by what is deemed normal, necessary and natural today.

In case you were not 100% certain after that gushing interview, I really do hugely recommend reading and generously gifting, Earthlings.

It is an ingenious, impactful, non-judgemental and of course entirely enjoyable way to plant the vegan seeds of compassion we must sow if we are to have any hope of fixing the world instead of continuing to destroy it.

That’s it for this week in Healthification. If you’re yet to rate, review and subscribe please do! I also feel like this might be a perfect episode to share with a vegan curious loved one, vegan ally or the young 8 or 80 year old in your life.

If you liked “An Epic Fantasy Trilogy in a World Where Speciesism is Reversed with Vegan Author Ray Star.” you’ll also like The Dog Who Ate The Vegetable Garden and Helped Save The Planet with Meg Hurley.

If you liked “An Epic Fantasy Trilogy in a World Where Speciesism is Reversed with Vegan Author Ray Star.” you’ll also like Hogwood: A Modern Horror Story with Viva!’s Juliet Gellatley.

If you liked “An Epic Fantasy Trilogy in a World Where Speciesism is Reversed with Vegan Author Ray Star.” you’ll also like Jordi Casamitjana and Ethical Vegan a Personal and Political Journey To Change The World.

If you liked “An Epic Fantasy Trilogy in a World Where Speciesism is Reversed with Vegan Author Ray Star.” you’ll also like Henry Mance and How to Love Animals In a Human-Shaped World.