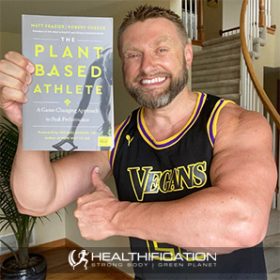 This is a conversation about longevity, grit and no excuses.

It’ll appeal to you if you “love to lift” yet also I’m sure if you can relate to dealing with set backs or injury or the pressure to live up to expectations – especially your own.

Long before he became the “go to guy” in vegan bodybuilding Robert Cheeke barely weighed 120 pounds as an athlete. He wanted to be bigger and stronger yet questioned whether you could do this as a vegan… and he failed at first.

Not at the avoiding animal exploitation part. I find it incredibly impressive that young Robert stayed true to the vegan ethic even though he initially struggled to gain even a pound of muscle. Of course it wasn’t about the lack of animal protein in Roberts diet. Thankfully there’s so much information, so many amazing vegan athletes visible today to dispel that old myth.

For a little official bio: Robert grew up on a farm in Oregon where he adopted a vegan lifestyle in 1995 at age 15, weighing just 120 pounds. Today he is the author of the books, Vegan Bodybuilding & Fitness, Shred It!, Plant-Based Muscle, and the new release, The Plant-Based Athlete. He is often referred to as the “Godfather of Vegan Bodybuilding,” growing the industry from infancy in 2002, to where it is today. As a two-time natural bodybuilding champion, Robert is considered one of VegNews magazine’s Most Influential Vegan Athletes. He is the founder and president of Vegan Bodybuilding & Fitness and maintains the popular website, VeganBodybuilding.com.

Let’s discuss Gaining 100 Pounds Of Vegan Muscle (and so much more!) with Vegan Bodybuilder and Author, Robert Cheeke.

By now we all know how fit, healthy, strong, buff and ripped you can be as a vegan athlete. How you can name a sport and find a vegan athlete excelling – often as the world champion. And yet just 25 years ago that was not the case. 25 years ago well-meaning individuals in Roberts life were fearful for his health and NOW (joyously!) people say: “I know I should go plant based for my health.”

The progress is amazing and I’m grateful to Robert for being there and leading the way 2 1/2 decades ago and perhaps more-so for the grace with which he now supports and lifts up the vegan athletes whose time is now.

To connect with Robert and order / preorder online The Plant-Based Athlete I have you all linked up below.

Connect with Robert via his main site: https://www.veganbodybuilding.com/

A vegan diet is one of the best things you can do for your health and the well being of our planet. @RobertCheeke #veganbodybuilding #plantbasedathlete Click To Tweet

That’s it for this week in Healthification. If you’re yet to subscribe wherever you’re listening please do and equally awesome, please consider sharing the show with someone you think would find value in it. Big thanks to YOU for sharing this week with me. You rock and I appreciate your support!

If you liked “Gaining 100 Pounds Of Vegan Muscle with Vegan Bodybuilder Robert Cheeke.” you’ll also like Hench Herbivore, Ex-Vegans and Being On The Right Side Of History.