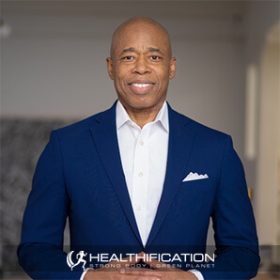 Friends we are in for a high impact ride today with powerhouse truth teller and vegan advocate Brooklyn Borough President, Eric Adams.

After a run in with cops as a teenager, Eric vowed to join the force and change it from within. He worked his way up from a beat cop to a Captain, to the New York Senate and then to Brooklyn Borough Hall. In November of 2017, he was reelected for a second term to represent Brooklyn as borough president. Born in Brownsville and educated in the city’s public school system, he is committed to helping each and every Brooklynite reach his or her full potential.

On a mission to tackle one of the most stubborn health problems in the country: chronic disease in the African American community, Eric had his own personal terrifying experience. He woke up with severe vision loss one day in 2016, and learned that he was one of the nearly 5 million Black people living with diabetes. According to his doctor, he would have it for the rest of his life.

In this conversation we discuss how Eric got: Healthy at Last (the title of his new book!) and reversed his diabetes with a whole food plant based diet.

In Healthy at Last Eric shares the key steps for a healthy, active life. Throughout he also explores the origins of soul food – a cuisine deeply important to the Black community, but also one rooted in the horrors of slavery – and how it can be reimagined with healthy alternatives.

I’m so grateful Eric squeezed this conversation into his very busy schedule… he’s running for New York Mayor in 2021!

I’m also super inspired to see how a previous non cook (and connoisseur of the fast-food dollar menu) now MAKES time for food prep and builds his life around what he eats. My point is: if a man with Eric’s schedule can make the healthy whole food plant based switch than any of us can and it first and foremost comes with embracing his attitude of: Why not me instead of why me?

To quote renowned vegan Cardiologist Kim Williams who wrote the forward to Healthy at Last: “Recipes have been passed down from generation to generation since slavery, and have been with us during the best and worst moments in our history”

So as Eric says:

“It was never in my DNA it was my dinner.” Brooklyn Borough President Eric Adams. #reversingdiabetes @ericadamsfornyc @HealthyAtLastBk #vegan Click To Tweet

The time in that chat just flew by however I hope it gave you an inkling of just how powerful and potent the food we feed both ourselves and our loved ones is. That whether like Eric you have diabetes in your family – or anything else, your health outcomes are not inevitable.

We didn’t get into it so much in that brief chat however when you watch Eric online (and I’ll have you all linked in in the show notes via strongbodygreenplanet.com) he does not shy away from his veganism OR from speaking truth to federal and state Gov officials / big business, whoever needs to hear it.

I’m just going to say it – for a politician, that genuine commitment to helping and serving people first is incredibly refreshing and it makes me so very hopeful.

You can purchase Healthy At Last: A Plant-Based Approach to Preventing and Reversing Diabetes and Other Chronic Illnesses all over the place right now (of course I’ll have you linked up in the show notes too) and in addition to being a highly practical and actionable book designed to help you get healthy at your own pace, on your own schedule it also features more than 50 recipes from celebrities and health experts, including Paul McCartney, Charity Morgan, Moby, and more!

Purchase Healthy At Last: A Plant-Based Approach to Preventing and Reversing Diabetes and Other Chronic Illnesses here:

That’s it for today in Healthification however before you go – I have exciting news!

Are you ready for some good news? A frustration and disappointment free zone?

I’m launching a NEW PODCAST all about rockin a #plantstrong lifestyle however importantly, we’re going to focus purely on the POSITIVES! A weekly fix of everything good for my vegan friends and the plant based curious.

To know when this new podcast goes live AND to help me out big time please subscribe to The Healthification Podcast on iTunes as I’ll drop the trailer on this podcast feed first:

If you liked “Reversing Diabetes and getting Healthy at Last with Brooklyn Borough President Eric Adams” you’ll also like AJP MP Emma Hurst and The Failures Of Our Existing Animal Welfare Legislation.

If you liked “Reversing Diabetes and getting Healthy at Last with Brooklyn Borough President Eric Adams” you’ll also like E598: Reversing Rheumatoid Arthritis Using A Whole Foods Plant Based Diet with Clint Paddison.

If you liked “Reversing Diabetes and getting Healthy at Last with Brooklyn Borough President Eric Adams” you’ll also like E578: No Fuss Vegan / The Advice I’m Giving My Mum!