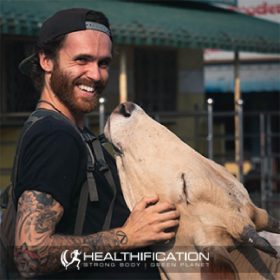 David Ramsden aka David Ramms across the socials is an animal rights videographer, photographer, content creator and public speaker.

He has investigated factory farms, small-scale farms and slaughterhouses all over the world and has a deep first hand insight into the horrors we humans inflict on animals.

Perhaps not surprisingly, David has a no nonsense approach to animal rights advocacy.

He calls it as it is and is not afraid to challenge Meatflakes or for that matter Vegan Wokeflakes! This is a wide ranging and fun chat with an activist who might have seen the worst of what humans can do to animals and yet also is adept at using comedy effectively in animal rights advocacy.

If you’re inclined to seek out more of David’s content online – good choice – I’ll have you all linked up in the show notes.

You’ll also find details for the interview I did with David’s friend Danny Ishay aka Lifting Vegan Logic where we discuss: Why Veganism Makes Smart People Stupid and my chat with Hench Herbivore who masters the fine yet frustrating art of calling out ex-vegans!

As much as sustainable activism for me lies in focusing primarily on what as vegans we have in common and putting my energy towards understanding and planting plant based seed by seed to hopefully influence non-vegans to make more compassionate choices. The more I take my little ‘one big happy vegan world” blinders off the more I’m grateful there are people like David committing to the type of activism I’m just not up for.

If you liked “David Ramms is Battling Meatflakes and Vegan Wokeflakes with Comedy.” you’ll also like Why Veganism Makes Smart People Stupid with Lifting Vegan Logic.

If you liked “David Ramms is Battling Meatflakes and Vegan Wokeflakes with Comedy.” you’ll also like Hench Herbivore, Ex-Vegans and Being On The Right Side Of History.

If you liked “David Ramms is Battling Meatflakes and Vegan Wokeflakes with Comedy.” you’ll also like Mic The Vegan vs Animal Agriculture and Covid-19.

If you liked “David Ramms is Battling Meatflakes and Vegan Wokeflakes with Comedy.” you’ll also like E622: Theodora Capaldo and Why Non-animal Testing Methods Are Superior On All Fronts.