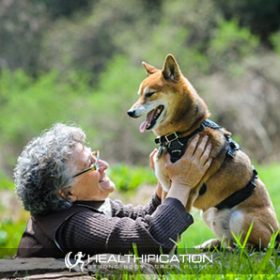 The vast majority of drugs tested to be safe and effective in animals ultimately fail in humans.

In many cases medical breakthroughs were delayed by dependence on animal models.

Chimpanzee use in research isn’t necessary, even though chimps are our closest genetic relatives.

There are superior non-animal testing alternatives ready for use right now and yet animals still suffer tremendously for research that doesn’t serve humans.

These are some of the facts that as a vegan and animal rights activist I’m ashamed to admit I’ve only become aware of recently. Animal testing is something I’ve personally pushed out of my mind. Up until now. Not because I don’t care. Not because I’m too lazy to hunt for the product that hasn’t been tested on animals – I’ll hunt it down.

I think it’s because firstly, the grisly details of vivisection are just so incredibly horrific that I choose not to look.

Secondly, perhaps it’s a little easier to ignore than say the cruelty and death we humans inflict on the animals we eat because those animals body parts and excretions are displayed every where I look every single day and once you make the connection it’s impossible to un-see.

I know I won’t un-see some of the images I witnessed in my prep for todays chat with Theodora Capaldo.

For decades Theodora has relentlessly and effectively fought the war against animal testing. It’s a heart breaking battle I don’t think I have the courage for and if you can relate well please hang on in there with me because thankfully we’re just in audio format and this interview isn’t too graphic.

For a little official bio: Theodora Capaldo, EdD, is a licensed psychologist, and is trustee of the American Fund for Alternatives to Animal Research (AFAAR). Dr. Capaldo recently retired as president of the New England Anti-Vivisection Society (NEAVS) a position from which she was able to both lead the charge that ended U.S. chimp research and persuade the first veterinary school to end “terminal surgery labs” in which dogs were killed. She has presented at national and international conferences, co-authored papers in peer-reviewed journals, provided expert assistance to documentaries, articles, and books on animal research and rescued hundreds of animals from lives of unimaginable torture.

My intention today is to arm you with the facts to make compassionate choices and to understand:

Why Non-animal Testing Methods Are Superior On All Fronts.

As we’ll see in todays chat the science truly is on the side of compassion.

There is without doubt no need for any animal testing. So why does it continue? And what can we do as consumers and activists to end the hell inflicted on millions of animals? Let’s find out with Theodora Capaldo and Why Non-animal Testing Methods Are Superior On All Fronts.

I’m back on my own and wow that chat was such a joy. I thought it might be heavy going as the subject matter certainly is however I’m feeling heartened and optimistic and I hope you are too. When the vast majority of humans do not make decisions based on their values and beliefs or the morality of an action or inaction… well it’s encouraging to know that the science is in favour of non-animal testing.

Of even greater impact, when it becomes most financially advantageous to choose non-animal testing that’s when the real change comes. Like animal agriculture. these animal abuse industries will change not out of the goodnesses of their hearts however rather to chase increased profits. As consumers we again have individual power here. Each time you mindlessly buy a product tested on animals you support that practice. Each time you buy a product not tested on animals you support and demand more such products.

As I’m sure you noticed Theodora brings her background as a psychologist to help understand the intricacies that allow otherwise compassionate people to turn a blind eye to the atrocities we inflict on animals.

I was particularly struck to hear Theodora explain how denial is considered the most primitive defence mechanism. It makes so much sense. From a selfish point of view it explains the extreme frustration I feel when interacting with someone so obviously in denial about animal abuse. I want to shake them! Because “primitive” is exactly how I feel they are acting. Though equally I’m certain I’m also guilty of as Theodora would say “compartmentalising compassion” in some regards.

In closing I think one of the effective ways each of us can help the millions of animals suffering in labs around the world is to spread the truth because as we’ve discussed these industries thrive in secrecy.

That said, if you know someone who’d find value in this episode please share it with them.

Finally I want to leave the last words to Theodora who on the matter of self-care, avoiding burn out and staying effective for the animals long term despite the inevitable disappointments shares: “What initially looks like failure is instead often laying critical groundwork for future victories.”

She is trustee of the American Fund for Alternatives to Animal Research (AFAAR).

That’s it for this week in Healthification. Huge thanks to YOU for sharing this week with me. I have such a variety of amazing guests scheduled to come on the show over the next few weeks so stay tuned and even better please subscribe via iTunes or wherever you listen.

If you liked “Theodora Capaldo and Why Non-animal Testing Methods Are Superior On All Fronts” you’ll also like E608: Gary Francione, Anna Charlton and Eat Like You Care: An Examination of the Morality of Eating Animals.