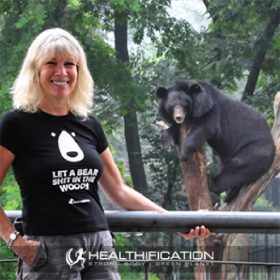 It’s such a huge joy to share with you this conversation with the amazing founder and CEO of Animals Asia, Jill Robinson.

Animals Asia is devoted to ending bear bile farming and improving the welfare of animals across Asia. As you will soon hear, team Animals Asia have been incredibly successful in their work to bring about long-term change and promote compassion and respect for all animals.

In fact Kindness is something Jill and her team seem particularly adept at extending to human animals as well.

A holistic approach to campaigning in combination with diplomacy and patience is something that has certainly paid off. I believe those of us campaigning to end animal agriculture and other forms of animal exploitation could take some valuable lessons. I mean that with full love and respect vegan friends. I felt the warmth radiating off Jill in this chat and it stuck me as not only a more effective way to advocate, also a more sustainable and joyful way to advocate.

Jill Robinson MBE, Dr.med.vet. h.c., Hon LLD is widely recognised as the world’s leading authority on the cruel bear bile industry, having campaigned against it since 1993.

Jill is a Council Member of the World Federation of Chinese Medicine Societies (WFCMS) Herbal Committee and her outstanding contribution to animal welfare has been recognised with a number of awards. In 1995, she won the “Reader’s Digest” Hero for Today award. In 1998, she was made an MBE by Queen Elizabeth of England. In 2008, she was named “Outstanding Earth Champion” in Hong Kong and was appointed World Animal Day Ambassador for Asia. In 2010, she was one of 12 recognised foreigners given the “You Bring Charm to China” award.

That’s a lot. However it’s not the qualifications and awards that I respect most about Jill. It’s the attitude of compassion and kindness she leads with and has maintained for decades despite the atrocities, the frustrations and the set-backs.

As Jill shares, her self-care is in the work. It’s in the sanctuaries and absolutely in seeing these bears and other animals get to live the exploitations free lives they deserve.

I hope you loved that time with Jill as much as I did. My finals thoughts, when animal exploitation globally is so huge and urgent I hope the success’s Jill has shared give you hope and heart.

I also know Animals Asia believes that empathy for one animal can evolve into empathy for an entire species and ultimately for all species.

So although these wins in Vietnam and China are for bears, dogs, cats and other animals in Asia I do believe the momentum helps us towards the tipping point for the billions of animals globally breed, enslaved and slaughtered for animal agriculture.

The cruelty is just as deplorable no matter the species, no matter the reason and no matter whether it’s carried out in China, in my home Australis, or wherever you live.

To connect with Jill and Animals Asia online I have you all linked up below.