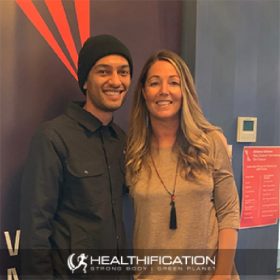 The sad reality, NZ has cashed in its fresh water.

NZ has increased synthetic fertilizer use more than any other OECD nation since 1990. Up 600%.

NZ has the highest rate of threatened native species on earth.

These are facts that NZ’s largest and most powerful company, Fonterra would rather you did not know. Industrial Dairy is NZ’s largest polluter and while New Zealand suffers 100% of the resulting environmental destruction 95% of its dairy products are exported.

Mind-blowing-ly, as a tiny little isolated country, NZ is also the biggest exporter of dairy in the world. Surely that’s not sustainable or sensible?

Today I’m delighted to share with you my conversation with director and producer of the documentary Milked, Amy Taylor.

The documentary follows young activist Chris Huriwai deep into dairy land where he takes on the giants of New Zealand’s most powerful industry, and reveals how the sacred cash-cow industry has been milked dry. His journey exposes not only the sustainability crisis and the dangerous denial of impending agricultural disruption, but also what New Zealand and other countries can do to change their fate.

MILKED follows young activist Chris Huriwai deep into dairy land where he takes on the giants of New Zealand’s most powerful industry, and reveals how the sacred cash-cow industry has been milked dry. Click To Tweet

I hugely recommend you check out AND SHARE Milked, it’s a stunning and impactful watch. It’s certainly a brilliant film to share with the individual in your life who thinks “that doesn’t happen here!” Whether their here, is in NZ, Aus, the US or anywhere.

On seeing the Fonterra and Dairy NZ responses to the film there’s a lot of mental gymnastics and abundant over-use of the word “sustainable” happening and yet nothing to actually back up their confidently proclaimed lies.

Of course I’m just one animal rights activist with an admitted agenda. An agenda that isn’t making me money. I want a compassionate, sustainable, healthy vegan world. One of the many things I think you’ll appreciate in the approach taken by Amy, Chris and team Milked is they really do speak to interests across all sides of the issue and that would have included Fonterra if they’d fronted up.

Equally team Milked are emphatic about sharing that farmers are not to blame for the system they are caught up in.

To connect with Amy and team Milked online I have you all linked up below.

Connect with Amy and team Milked via https://milked.film/