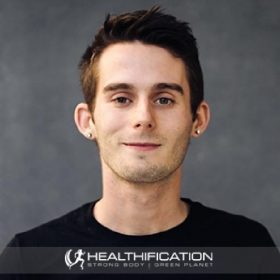 I know Kai, from the past few years of street activism and I have a lot of respect for his focus, consistency and his strategic and importantly effective activism.

This conversation is going to be very actionable if you’re looking to up your activism game or simply just feel more confident in conversations with non-vegans.

In addition Kai share some valuable insights into why we make and cling to the excuses we often resort to which hopefully can help us better understand and more effectively communicate with both our non vegan loved ones and if we choose, random strangers on the street.

Ok, let’s hear from Animal Activist Kai McBeth who is Destroying Anti-Vegan Nonsense… with both logic and compassion.

I’m grateful that Kai was able to shine a bit of light on the admittedly disappointing state of the activism scene in Sydney right now. If we can’t have cubes of truth we can instead share the cold, hard, brutal facts of animal agriculture as made available by the industry itself.

Which in combination with a shout out to any number of amazing free online film resources such as Watchdominion.com Earthlings.com and Landofhopeandglory.org can provide much needed transparency to the horrors of animal agriculture right now, today, all around the world.

The Australian Bureau of Statistics details that the Animal Agriculture Industry was worth $29.6 billion in 2017/18. This means within Australia’s $1.42 trillion economy as reported by the World Bank animal agriculture makes up approximately 2% of GDP.

Aligned with this, only a minority of farmers rely solely on animal agriculture.

As I often say, vegans support farmers – we just recognise that for the animals, for the planet and for the very sustainability of farmers livelihood they need to transition to growing crops for human consumption not animals for slaughter. With government support where needed.

To connect with Kai online I’ll have you all linked up in the shoe notes below.