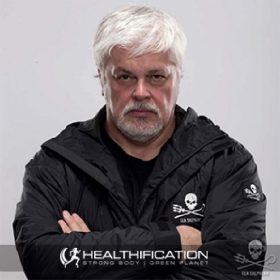 Friends, you’re likely familiar with Captain Paul Watson founder and director of the Sea Shepherd movement and the vital, urgent work they do to protect marine wildlife worldwide with aggressive non-violence.

If not, well you’re in for a ride! Sea Shepherd Conservation Society doesn’t just sink whaling vessels. Though they do. And they have a zero death or injury unblemished record. They also: partner with governments from around the world, to assist them with the detection and capture of criminal enterprises that are in operation to engage in Illegal, unreported, and unregulated fishing operations.

To quote the Captain:

We are pirates of compassion hunting down and destroying pirates of profit. Captain Paul Watson @SeaShepherdSSCS #ForTheOceans Click To Tweet

Before we get going with this conversation I want to share a few stats to set the stage. My sources will be linked in the show notes.

The simple fact is: If the ocean dies we die.

Officially (from https://seashepherd.org) Sea Shepherd is an international, non-profit marine conservation organisation that engages in direct action campaigns to defend wildlife and conserve and protect the world’s oceans from illegal exploitation and environmental destruction.

Our mission is to protect defenceless marine wildlife and end the destruction of habitat in the world’s oceans. Since 1977, Sea Shepherd has used innovative direct-action tactics to defend, conserve and protect the delicately-balanced biodiversity of our seas and enforce international conservation laws.

However let’s hear from the man himself. Without doubt the individual with the most incredible, terrifying and moving stories I’ve ever had the chance to chat with. A gent that does not seem to feel fear or to care what others think of him. A couple of qualities that thankfully he’s been utilising with extreme effectiveness both at sea and in the courts in a 6 decade fight for his clients, the animals.

That chat was truly such a privilege. Exactly the type of conversation that brings me hope despite all the terrifying data I trawled through in prep.

A takeaway that seems to be on repeat from so many of my amazing guests:

Find the type of activism that works for you. As long as you do something. Because the best way to avoid being overwhelmed by a problem is to be part of the solution.

And even if you think you might not win – we might not make it to a vegan world where we live in harmony with other species instead of enslaving and slaughtering them for short term investment and short term gain. Even if you think, “we can’t win here the odds are against us” there’s the advice given to Paul as a young man by Russell Means: it’s not about winning or losing. We’re here because this is the right place to be, the right time to do it and the right thing to do.

To connect with Sea Shepard online and look into volunteering or other forms of support I’ll have you linked up below.

Finally, please share this episode with a friend or family member who loves the ocean and still contributes to its demise via consuming land and sea animals.

I’d super appreciate that, Thank You.

The Oceans are the birthplace of all life on the planet. We have to halt the destruction of life in our Ocean, for if life in the Ocean dies, we all die. Captain Paul Watson @SeaShepherdSSCS #ForTheOceans Click To Tweet @SeaShepherdSSCS is an anti-poaching organization dedicated to operating within the boundaries of international law, to uphold international conservation law, with a commitment to absolute non-violent tactics. Captain Paul Watson #ForTheOceans… Click To Tweet

See what it takes to be a Sea Shepherd Volunteer:

Become an Ocean Champion via a monthly donation here:

Check out the Seaspiracy documentary:

If you liked “Sea Shepherd’s Captain Paul Watson and Protecting Marine Wildlife Worldwide with Aggressive Non-violence.” you’ll also like 638: PETA’s Ingrid Newkirk | Animals Are Not Ours To Experiment On, Eat, Wear, Use For Entertainment or Abuse In Any Other Way.

If you liked “Sea Shepherd’s Captain Paul Watson and Protecting Marine Wildlife Worldwide with Aggressive Non-violence.” you’ll also like Jonathan Balcombe, What A Fish Knows The Inner Lives of Our Underwater Cousins.