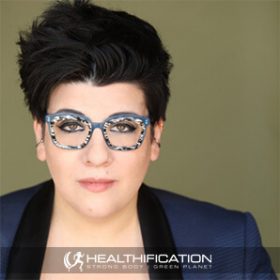 My guest today believes, if there was ever a time to become a fabulous vegan this is it and I could not agree more!

Jasmin Singer is a worldwide leading expert on veganism and a coveted speaker on topics including radical body positivity, personal narrative as a means of social justice, and how to change the world for animals.

Jasmin is someone I’ve respected and admired from afar for years now and she was exactly the kind, passionate, compassionate yet powerful guest I anticipated she would be.

Jasmins new book, The VegNews Guide to Being a Fabulous Vegan: Look Good, Feel Good & Do Good in 30 Days elegantly negotiates the fine line between flying the proud and urgent vegan flag that I know my heart wants to lead with yet also welcoming the vegan curious with open non judgemental arms and plenty of plant based deliciousness that I understand is most effective for most new vegans. It’s an approachable, entertaining and actionable book with 30 wide ranging and vital topics and 30 tantalising recipes to guide and support both the vegan curious and long term vegans.

For a tad of official bio: Along with animal law professor Mariann Sullivan, Jasmin is the co-host of the long-running  award-winning Our Hen House podcast that centres around animal rights. She is the former Senior Editor for VegNews Magazine—the world’s leading plant-based media brand—and the longtime love columnist and celebrity interviewer. Her recent interviews have included Joaquin Phoenix, Cory Booker, Mena Suvari, Tig Notaro, and Bob Barker.

As Jasmin shares at the beginning of The VegNews Guide to Being a Fabulous Vegan, there are few other words in the English language that immediately bring up such a knee jerk reaction in almost everyone as, Vegan.

Sadly that strong reaction isn’t always positive. However it could be. There’s so much abundance, deliciousness, health, community and joy to embrace when you adopt a vegan lifestyle and I’m learning it’s imperative that as established vegans and animal rights advocates we lead with love, compassion and fabulousness.

We touched on so much in that chat however it’s just a tiny glimpse of all the goodness in The VegNews Guide to Being a Fabulous Vegan. As mentioned I’ll have you all linked up in the show notes below so far as how to connect with Jasmin.

As a final thought, I’ve been spending a lot of time thinking about what’s most effective and most sustainable so far as both leading a happy vegan lifestyle and being an effective animal rights advocate long term.

When to fly the vegan flag? When to just be. Mental and emotional burn out is real. Of course there’s no right, or no one answer. However I’m certainly grateful to have role models such as Jasmin to learn from.

Purchase The VegNews Guide to Being a Fabulous Vegan: Look Good, Feel Good & Do Good in 30 Days:

Check out Jasmin’s first book: Always Too Much and Never Enough: A Memoir (Berkley, 2016).

Connect with Jasmin via her home site: https://jasminsinger.com/

Listen to Our Hen House podcast:

Explore the Encompass essays, including From Speaking Up for Animals to Becoming an Antiracist:

That’s it for today in Healthification however have you heard yet? My NEW PODCAST all about rockin a #plantstrong lifestyle focusing purely on the POSITIVES is live!

Simply search Plant Positive wherever you listen to podcasts! If you like the show (either show!) now is the time to rate, review, subscribe and share because there is only one chance for any new show to hit New and Noteworthy and WOW, I want more plant strong representation in the health, fitness and nutrition categories so much! If you do too, then this is your chance to help make it happen!

If you liked “Look Good, Feel Good and Do Good by Becoming a Fabulous Vegan with Jasmin Singer” you’ll also like Meat The Victims with Animal Activist Leah Doellinger.

If you liked “Look Good, Feel Good and Do Good by Becoming a Fabulous Vegan with Jasmin Singer” you’ll also like 638: PETA’s Ingrid Newkirk | Animals Are Not Ours To Experiment On, Eat, Wear, Use For Entertainment or Abuse In Any Other Way.

If you liked “Look Good, Feel Good and Do Good by Becoming a Fabulous Vegan with Jasmin Singer” you’ll also like Sentient Media’s Ana Bradley and Creating Transparency Around The Role Of Animals In Our Daily Lives.

If you liked “Look Good, Feel Good and Do Good by Becoming a Fabulous Vegan with Jasmin Singer” you’ll also like E622: Theodora Capaldo and Why Non-animal Testing Methods Are Superior On All Fronts.