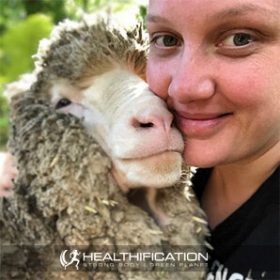 Australian animal rights activist Joanne Lee started her activism journey in January 2017. In September 2017 she co-founded Direct Action Everywhere (DxE) Melbourne and just 3 months later led a team into a daylight slaughterhouse shutdown and rescue, where 7 lives were liberated. She was part of the infamous Melbourne Steakhouse Disruption, which received global media attention, and she appeared on The Project and 3AW.

Friends, Joanne’s approach to activism focusing on civil disobedience; including disruptions, shutdowns, and open rescue could be something you aspire to. Or it might seem a little to confrontational. You won’t be surprised to hear Joannes approach is one I have huge respect for because I agree: “passively asking for the exploitation and the suffering and death of animals to stop isn’t liberating them quick enough.”

Although DxE Melbourne has disbanded, Joanne still collaborates with like-minded activists, focussing on large-scale actions including Meat the Victims.

Outside of activism Joanne is a Human Resources professional. The skills she has acquired through her corporate experience have had a significant influence in the way she contributes to the vegan activist community. In fact Joanne’s passion to inspire vegans to get active is something we’ll discuss today as well as the vital role our language plays in changing and challenging speciesist perceptions about other animals. Also the huge, harrowing and largely hidden horror that every winter in Australia 10-15 million lambs die within the first 48 hours of life due to the profit driven practice of winter lambing.

Is your mind blown and your heart broken? Mine too. This is the information hidden from consumers that needs to be shared. Heart warningly Joanne also shares the stories of the individuals rescued from animal agriculture who now reside at her micro sanctuary, The Weetbix Gang.

I loved that chat, and yet also every time I speak to an amazing animal rights activist more of the appalling atrocities we humans inflict on animals is revealed. Just when you think, “Surely there’s nothing more?” Surely our greed, ignorance and cruelty can go no further? Then yet again the human race disappoints.

Yet equally there are the individuals like Joanne committed to caring for the casualties of animal agriculture and hell bent on sharing their stories.

That’s hopeful. As much as the practice of winter lambing fuels in me a burning anger even hate – I spiralled into industry websites in prepping for this chat and it wasn’t good – however I do also want to better understand the animal farmers story, their options, opinions and of course however they might transition into animal free farming.

Excitingly, next week I’ll share the story of an ex Chicken and Cattle farming couple with you.

It was a rare and utterly genuine insight into what it’s like to spend 18 years raising animals to be killed for food and then become plant based first for health before being struck by the impossible to ignore lightening bolt that the lifestyle you feel completely financially trapped in is killing thinking, feeling animals – the planet and your fellow humans.

If you’re yet to subscribe to this podcast please do – it’s actually hugely impactful so far as helping others find the show AND it means you’ll know when my emotional yet impactful show with former Chicken and Cattle Farmer Jennifer Barrett drops.

Joanne recommended the book by Tom Regan: The Case For Animal Rights.

Also the article by Dilan Fernando: 120+ ways to help animals.

To connect with Joanne online and of course The Weetbix Gang (!) I have you all linked up below.

If you liked “Ending Speciesism with The Weetbix Gang and Aussie Animal Rights Activist Joanne Lee.” you’ll also like Exploding The Myth That Animal Abuse Doesn’t Happen In Australia with Farm Transparency Project.