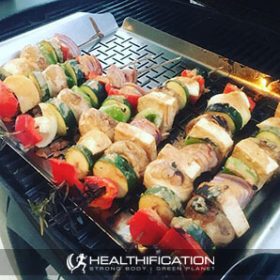 A common and devastatingly effective strategy deployed by big food and drug companies to peddle their products is the idea that if you just create enough confusion with consumers we’ll stick to status quo and / or consuming their products.

I’ve fallen for it many times.

Though I thankfully never saw the appeal of cigarettes (I bring this up as the tobacco industry is most infamous for championing confusion), I absolutely subscribed to the “tofu gives you flabby hips and thighs” myth. I was just confused enough about the potential “estrogen mimicking effects of soy” and certainly more than incentivized enough at the prospect of not growing my already flabby thighs that I avoided soy for the majority of my vego years.

I also ditched almost all fruit from my diet for a few years while gleefully demolishing fake protein crisps and diet coke.

Perhaps rationally you struggle with the idea that fruit will make you fat. However the whole sugar thing can be confusing.

Today I’m addressing one of the myths about living a healthy vegan lifestyle that I genuinely thought would by now have been well and truly exploded.

It’s the Myth Of Complementary Protein.

This myth was debunked by the scientific nutrition community decades ago and yet annoyingly it still persists.

In fairness I guess this is slightly less frustrating than the still too frequently blurted out: “Where do you get your protein?”

It never fails to amaze me how concerned non-health professionals suddenly are about someone’s protein levels once they hear that someone is  vegan.

Let’s start with an example of the Myth Of Complementary Protein. It’ll go something like this:

“I’ve read that plant foods don’t have all the essential amino acids humans need to be healthy so you need to either eat animal products or combine certain plant foods with others to get complete proteins.”

So far as the history of the Myth Of Complementary Protein it almost certainly didn’t start with any malicious intent unlike the Soy Is Unhealthy Myth I might add.

[side note] In show ‘518: To Eat SOY Or Not To Eat Soy?’ I share how after digging deeper I learnt most anti soy scaremongering is traceable back to a single US fringe group called the Weston A Price Foundation (WAPF).

The Weston A. Price Foundation claims that saturated animal fat is essential for good health (and here I quote from their own website) “humans achieve perfect physical form and perfect health generation after generation only when they consume nutrient-dense whole foods and the vital fat-soluble activators found exclusively in animal fats.”

In direct conflict with the findings of the World Health Organisation and both the American and British Dietetic Association, WAPF also claim that animal fat intake and high cholesterol levels have no link with heart disease or cancer.

Back to the Myth Of Complementary Protein, it was inadvertently promoted and popularised by Frances Moore Lappé in her 1971 book, Diet for a Small Planet. The author stated that “plant foods are deficient in some of the essential amino acids, so in order to be a healthy vegetarian, you needed to eat a combination of certain plant foods at the same time in order to get all of the essential amino acids in the right amounts.”

Frances was a sociologist looking to end world hunger. Not a doctor, scientist or nutritionalist.

She correctly noted that the process of converting plant protein into animal protein was incredibly wasteful and that by instead directly consuming plant protein we could end world hunger. In the 10th anniversary edition of her book (1981) and again in subsequent editions Frances retracted her statement about the need for complementary protein and revealed that in trying to end one myth, that world hunger is inevitable she regrettably perpetuated another myth, about the need for complementary protein.

If you eat JUST broccoli or JUST beans in a day, you’ll get enough protein.

If you’re still unsure so far as protein quality and that myth that animal protein is of a higher quality then plant protein?

Dr Greger debunks this too in his article and video on The Protein Combining Myth. In short the idea that plant protein was inferior came from studies on rats over a century ago. Rat babies didn’t grow as well when fed plant protein instead of rat milk. But wait! They also didn’t as well when fed human breast milk. Because they are rats and rat milk has 10 times the amount of protein as human milk because rat babies grow 10 times as fast as humans.

One ridiculous study latched onto with volition to peddle confusion and propagate the myth that humans must gorge ourselves on the flesh on animals 3 times a day.

Having said all that, I’m still a huge fan of plant based protein and although I don’t track my macros I have done the numbers out of curiosity and I tend to hit at least 100 grams of protein a day. Here’s why,

Bonus, #6 Reason To Eat More Plant Based Protein: You can tell those pesky carnivores you easily and deliciously get over 100 grams of #plantstrong protein a day. Ok, that’s not such a valid reason however sometimes I get over the un-solicited food advice from un-qualified individuals.

I saw the best meme on Insta addressing this yesterday. It was posted by a vegan body builder I follow called @conscious_muscle.

“How can you tell if someone is vegan?

Don’t worry, when you offer them meat they will say “non thanks”, then you can ask them a bunch of questions about it which they will answer politely, then you can get upset about it for no reason.”

If you’d like to up your #plantstrong protein intake simply because it’s high value, cost effective, satisfying and delicious here are a few quick strategies:

One: The Scatter #plantstrong Protein Solution.

Top your salads, stir-fries, curries, nachos, soups, roast veg and stews with: a tablespoon or two of hemp or pumpkin seeds. 50 grams of roasted chickpeas or edamame. A scattering of your fav nuts or the ever versatile, nutritional yeast.

Stir a can of four bean mix through your weekly curry mass cook up. Protein pimp your tabouli by stirring through hemp, pumpkin seeds and nutritional yeast. (Yes, these are likely my 3 Go2’s however find what you love most!). Make your oats or chia breakfast bowls even more substantial with a stir through dollop of nut butter or tahini.

One: The Blend #plantstrong Protein Solution.

Blend a few tablespoons of hemp seeds into your hummus or other fav dip. Protein pimp your smoothie with nuts or nut butter, chia seeds, spirulina and even white beans. Sneak some of your fav plant based protein powder (I love Prana Himalayan salted caramel) into banana nice cream, brownies, power balls or any sweet treat.

So much plant based protein rich deliciousness right? To get actionable today, I’d love to hear from you! Is there a persistent myth about living a healthy vegan lifestyle that you’d like me to cover in an upcoming show? Please let me know via strongbodygreenplanet on Insta or Facebook or even via good old email: kate@strongbodygreenplanet.com.

That’s it for today in Healthification.

If you’ve enjoyed this show and gotten value out of it would you consider sharing it with someone close to you? I’ve been doing some work to improve distribution / visibility of the show so it’s now available across iTunes, Stitcher, Spotify and hopefully other platforms too. However a recommendation from you to someone who you think would find value in the show would truly be most awesome!

If you liked “The Myth Of Complementary Protein” you’ll also like: The Problems Of A Dieting Mind