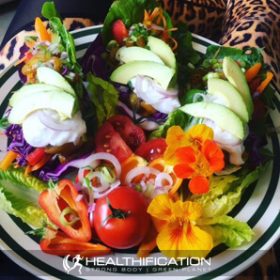 Although I’m going to share some new plant based recipe wins with you today first I have a question:

Do you have something – a belief about YOU – that you regularly repeat to yourself that just isn’t true?

I have many. For years I had hang ups about my eyes. They don’t work so well and they can go a little wonky and I’d get insecure about making eye contact. I turned something not so big into a really big deal. And then, at 16 my first boyfriend wrote me a love letter (does that still happen – maybe it’s just in text format now?) talking about my “beautiful green eyes” and I was was pretty much cured of my irrational, out of proportion eye hang up.

For may years I also nurtured the limiting belief that I’m not a good cook.

It’s true, if I were to compare myself to my mum – who is an AMAZING cook – who has a global reputation for her stunning cheesecakes, perfect pavlova’s and irresistible friands (among so many other things) well then I’d come up seriously lacking. However dessert isn’t my forte.

Delicious, nutritious, primarily one ingredient, high protein, low carb vegan is my forte! And that, I’m beginning to accept I’m pretty ok at!

Before we get rolling with 3 New Plant Based Recipe Wins: Watermelon Pizza, Jackfruit Tacos, Loaded Sweet Potato, I’d love you to consider the belief YOU might have that’s holding you back?

Perhaps you also subscribe to the: “I’m a rubbish cook” or even “I don’t have time to cook” belief?

Or maybe you’re holding tight to: “I need meat to enjoy a meal, feel satisfied and function effectively”

Onwards with some plant based deliciousness…

This is perfect for breakfast, desert or a snack. The options are limitless.

This is a higher carb meal than I’m used to. I wanted to try it though and it was pretty yum. In the future I’d probably share 1 large sweet potato between 2 people and create a huge salad to go with it so there’s a lot more fibrous veg.

Seperate your lovely baked sweet potato down the middle. Load it with kale and black been mix. Layer over cooked asparagus (I put them in with the potato when it was a few minutes off finished). Generously add dressing or sliced avocado. Sprinkle with hemp seeds to finish.

This was my first attempt at Jackfruit and I’ll certainly be making it again! I used canned as that was all I could find and followed a recipe for the Jackfruit from Thug kitchen. The recipe was for a sandwich so I just turned it into Tacos with ALL the toppings!

Arrange cos and cabbage taco shells on a big plate. I used 3 large leaves of each (a cos sitting on top of a cabbage – it’s going to be messy regardless though!) plus extra for decorating. First line your tacos with sliced capsicum, cabbage and carrot.  Then scoop in the jackfruit. Now add a tablespoon of coconut yoghurt to each taco. It’ll hold in place your avocado, red onion, spring onion, coriander and hemp seeds.

The recipe that doesn’t make the cut for todays show is banana pancakes. It tasted pretty super awesome raw – and then I added it to the fry pan and everything got sticky fast! I’m going to work on it – perhaps ask my mum for some tips (!) – though I know I tripped up by trying to rush straight to lower carb higher protein by swapping out oats for chia seeds!

To get actionable today: Have you been thinking of that belief YOU might have that’s holding you back?

I’d love you to challenge that belief this week. Perhaps that means getting your cook on (!) and trying one of these recipes?

Maybe it’s a matter of asking:

That’s it for this week in Healthification. Huge across the pod-waves thanks to YOU for sharing this week with me.

The Healthification podcast is proudly bought to you by my FREE ‘Easy Vegan’ plan. It took me 25 years to transition from a meat eater to a happy, healthy, non-judgemental Vegan! You can do it in 7 short days with my simplified ‘easy vegan’ plan!  Get the fit, strong, and healthy plant based body you deserve…while avoiding ALL the mistakes I made along the way!