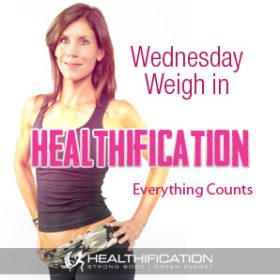 Has something ever been so important to you, that you want to commit to it 100%.

And yet there are so many steps involved in 100%. So much change to be made, that instead you don’t commit at all?

I’m actually not talking about food and exercise. Although I could be.. and I will make todays show applicable to fat loss and body gain. In todays show:

If you’ve been tuning in to Healthification for any period of time:

Firstly, THANK YOU – I super appreciate it!

Secondly, you’ll likely know I’m vegetarian – for ethical reasons. I have been for 23 years though for the last 2 years I have eaten fish.

For all of those 23 years meat free and strangely perhaps most in my past couple of fish eating years I’ve felt that really, truely, I’m meant to be Vegan.

However, and to all my non vegan and non vego friends perhaps you can relate – there seemed to be a lot of steps involved in becoming Vegan. Even, A LOT of sacrifice.

In fact I have a limiting belief that a vego chick such as myself maybe, Probably, HIGHLY LIKELY couldn’t have the body and the energy I love on a 100% Vegan diet.

Now, that’s probably not even true. However it’s a belief I’ve waved around as my little excuse to myself flag for years.

The other excuse I’ve held tight to is that the vegan step is All In. 100%. No turning back. And again, that’s just rubbish.

To bring this back to your body gain goal: Is there something you’ve been resisting because you’ve conveniently convinced yourself you have to be all in? 100%. No turning back.

‘All In’ ROCKS when you can do it. However when it stops you from taking action on something you say is important to you? Well then it’s just an excuse.

As I take Vegan’ish for a spin this month here are 3 things I’m reminding myself so far as Everything Counts. 3 things I hope are also useful so far as that something you’ve been resisting because you’ve convinced yourself you have to be all in:

One: There is not right or wrong so far as your beliefs.

There’s only what works. And you can change your beliefs at any time.

Beliefs are possibility filters and the important thing is to create the beliefs that filter in more of what you want and less of what you don’t want.

I used to believe I could never be vegetarian. Also that all cardio is tedious-boring-hateful. And (until super recently) that I can’t have the body I want following a Vegan lifestyle. Now maybe I can’t. We’ll see in a month or few.

However I’m going to choose the belief: I can be Vegan’ish and everything counts.

In the same way that someone else might choose the belief: I can make time for 10 minutes exercise a day and everything counts.

Or even: I can prioritize 3 minutes meditation a day and everything counts.

Two: A tiny Part In action can have a huge accumulative result.

Perhaps for a non-veggie-lover your part in action, instead of a complete nutritional overhaul might be to find your: Gateway veg.

This is the vegetable that is at least somewhat enjoyable. That you buy even when it’s a little more expensive and that you bother to cook a little more creatively than just the boringly-bland-boil.

It’s a gateway veg because it’s proof to you that not all veg are disgusting. It might even with time be a stepping stone to the next veg. Perhaps something similar. Or maybe something you cook in a similar way or pair with a flavour you do love.

In the same way that when the wheels fall off your best eating and exercising intentions it’s generally due to a small series of decisions and actions – not one big face-plant into a baked lemon cheesecake – well, the opposite can be true to your benefit too.

Some of my fav small hinges that swing big doors:

=> Ditching the trigger meal, that repeatedly has set you off on an “anything goes” extended weekend binge fest.

=> Prioritizing enough sleep, so that you wake up fresh, focused and much more likely to choose a healthy breakfast and complete your early am exercise.

=> Committing to a Sunday shop for lots of fresh food, so you never have the chance to pull that old “but the house has no food” weeknight excuse.

To get actionable today, well it’s got to be that something you’ve been resisting because you’ve convinced yourself you have to be all in. You’re thinking of something right?

One extra serve of veg a day – which isn’t the same as veg at every meal – yet beats no extra veg a day!

One less can of soft drink a day.

One walking meeting a week.

One alcohol free night a week.

Or my personal upgrade this week – which is a little embarrassing but by now you know I’m a little extreme – 60, YES SIXTY (!) less free range egg whites a week.

I’ve cut my protein pancakes out of my routine (and replaced them with a delicious blended mix of Vegan Choc Protein Powder, almond milk, chia seeds and ice) and it’s fine… AND everything counts!

I’d love to know that something you’ve been resisting?

Is it as extreme as my eggs?

That’s it for me today. I hope you can join me for the Friday FAQ show where I’m taking something new for a spin. I’m going to call it my: Weekly Wrap (it’s sort of the Best Of v Struggle Street!).

If you liked this you’ll also like: My best Fuel, Move, Life advice for out-smarting weight loss overwhelm.