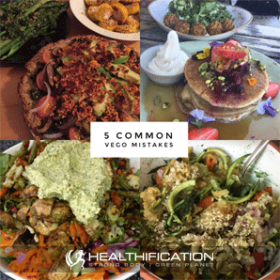 I know a very dear family friend – he’s around my dads age – who has been very over weight most of his adult life.

When my mum informed me a couple of years ago that his latest strategy in weight loss was to go VEGO I was shocked. It’s a tough way to lose fat.

Now this is a gent who would happily chow down a couple of Big Macs for morning tea so I guess vego is a huge step in the right direction so far as better quality fuel… or the potential for better quality fuel however it’s really not the easy option. It means ditching the easiest – YUMMIEST – most accessible high protein, low carb fuel: Meat …and then, trying to find the alternatives that are readily available, edible and NOT crazy-processed-high-carb-low-protein.

In todays show this lil vego is going to share:

I’ve made most of them… except maybe #5.

Avoid the mistakes I used to make by grabbing my eBook:

I do believe if eating vego is important enough to you – as it is to me – then absolutely you can make it work. Whether you eat fish (as I did for a year or so) or even if you eat 100% plant based (as I do now).

Let’s start with the most obvious mistake I see vegetarians making when eating for fat loss:

It’s the classic vego pizza or pasta or risotto dish… which perhaps you hold the cheese on? Whether you’re a fan of dairy or not the thing with a high carb low protein and when you hold that cheese – low fat dish, is that you can eat a HUGE amount.

The protein and fat are what makes the dish satiating – so if you’re anything like me, you’ll be able to demolish your own large pizza, some bread and then still find yourself eying off the scraps of those you’re dining with.

Luckily their pizza is likely contaminated with meat, however the fact remains: You’ve over eaten yet you’re still craving dessert AND you’re likely feeling guilty and lethargic to boot.

This is the meal designed for the vego by the non-vego. Or maybe it’s the side dish never meant as a stand alone meal that you resort to because there is nothing else on the menu… at least nothing else that isn’t crazy-high-carb.

The too light meal is merely a tease to your taste buds. It’ll leave you still ravenous and likely more than a little resentful as it costs as much as a proper meal yet basically means you need to go home and eat again.

At this point I hope your house is a temptation free zone. A clean eating sanctuary. Otherwise you’ll be faced with battling the call of the packaged UN-goods hiding out in your pantry and freezer with nothing but discipline and an empty stomach at your disposal.

I’ve really never understood why a vego would want to eat fake meat products however maybe that’s because I’m vego for ethical reasons and the last thing I want my fuel to pretend to be is dead animal.

I guess it’s just easy. There’s less preparation time in opening a packet. However it really is possible to stick to primarily one ingredient fuel as a vego. It’s simply a matter of finding what works for you.

=> Some of the time it will be making your own meals on mass: like vego burgers, soups and bakes.

=> Some of the time it can be a simple swap: like adding nuts, hemp or other seeds or egg.

=> Some of the time it will mean finding (even making) your own accompaniments to quickly jazz up a meal: like dairy free kale pesto, or zucchini hummus or cashew cheese.

The simple guideline when choosing your vego options is that Michael Pollan classic: “If it came from a plant, eat it; if it was made in a plant, don’t.“

I did this one big time. The macro-nutrient break down of soy ticked all my boxes: high protein, low carb, low fat – and low taste but hey you can’t have everything and it sucks up other flavours well. I stayed in ignorant bliss regarding the estrogen mimicking effects of soy for years.

Until I discovered how outta whack estrogen levels – which soy can cause – will lead to extra fat storage in estrogen sensitive areas: that’s the hips and thighs for us ladies!

Do you want to know how long it can take to break a bad habit?

A nano-second if you want less thigh fat bad enough! I was done with soy for good… and beyond that I started to incorporate cruciferous super veg (these good guys even out your estrogen levels again) into every meal.

So, this is where you need to get a little crafty. You’re cutting processed-thigh-fat-causing-soy and yet you want to ensure your meals are still high protein and not too light. What’s a vego to do?

I really don’t do things by halves!

The solution I would advocate now is a more balanced approach: incorporating fish and eggs if you eat them and then also or alternatively instead of if you’re fish and egg free… a mix of other quality protein sources like a vegan protein powder, nuts, seeds (especially hemp and pumpkin) and of course other little vego helpers like nutritional yeast.

The mistake I didn’t struggle with! Although I know a lot of people do.

I became a vego because I was sick of having to politely force down food I was repulsed by. I really do believe that what you choose to fuel your body is your choice. Whether you’re choosing low carb or one ingredient or vegan OR low-carb-one-ingredient-vegan.

I’m also ok with being the odd one out. The only one not ordering at a restaurant that doesn’t serve food I eat. Or the annoying one politely asking for an adjustment to the menu.

A couple of considerations to make this work:

One: I don’t expect other people to cater to my fussiness. If what I’m eating isn’t the norm then that’s cool I don’t expect special treatment. It’s up to me to bring my own or miss out or whatever so long as I’m respectful, polite and discreet.

Two: I don’t judge other people for their food choices. More often than not others extend me the same curtesy – perhaps they are curious, however generally it’s no biggie.

You’ll be surprised how accepting people are of your choices when you make those choices with absolutely certainty.

To get actionable today, vego or not does one of these common mistakes jump out at you as something you could improve on?

To recap, are your meals at times: too HIGH CARB and LOW PROTEIN / too LIGHT / too PROCESSED / too Reliant on SOY / or are you ever too POLITE so far as the fuel you give your body?

That’s the action step for today, to pick just ONE and come up with a work-around for it this week.

You 100% can be Vego or Vegan and eat primarily one ingredient foods and keep it High Protein Low Carb… Oh, AND also rock around 24/7 in a strong, healthy body you love…
I share more plant based deliciousness in my FREE 3 Day Easy Vegan Plan!
It’s 100% free. It’s fun. It’s easy.
Here’s what to expect each day: 3 abundant plant based meals. An awesome equipment free fat burning workout. And also the mindset tips that make your best eating and exercising choices simple and sustainable.