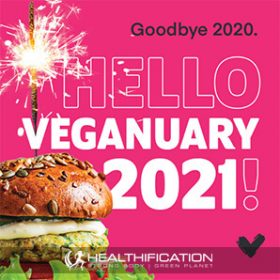 That is astounding growth since the UK-based charity first asked people to pledge to eat vegan for the month of January, back in 2014. That first year over 3,000 people participated.

Veganuary and we’ll discuss how to make the transition to veganism as easy and as enjoyable as possible.

To be clear Veganuary isn’t just a 31 day challenge! Throughout the year, Veganuary encourages and supports people and businesses alike to move to a plant based diet as a way of protecting the environment, preventing animal suffering and improving the health of millions of people. During the 2020 campaign more than 600 brands, restaurants and supermarkets promoted the campaign, and launched more than 1200 new vegan products and menus in the UK market alone.

I love that Veganuary embraces an alternative to the angry face of Veganism! It is realistic, supportive and non judgemental in acknowledging it’s ok to not be a perfect Vegan. In fact their motto is: Don’t let perfection be the enemy of the good.

Further to that, to quote Jane Land who founded Veganuary with partner Matthew Glover Veganuary’s pledge format makes going vegan “more acceptable and accessible, something fun, a challenge perhaps, but a positive one”

I’m all for changing public attitudes about veganism and making it more mainstream. That’s the only way we have any chance of getting to the glorious compassionate vegan world I’m dreaming of.

I’m so excited for the tipping point we will surely reach where there is no stigma, no social ostracism and no inconvenience to becoming vegan.

As much as I proudly wear my animals rights activist hat and experience daily frustration that the movement towards a vegan world is not happening faster, I also am becoming more conscious of the huge responsibility we share as a vegan community to be as welcoming and supportive to new vegans, and to the plant based curious as we possibly can.

If anyone deserves our wrath its the people who are not even open minded enough to consider why there might be value (HUGE value) in a vegan lifestyle. Not those willing to risk trying something that absolutely for many people – likely the majority of humans – would feel daunting, overwhelming and restrictive.

Check out the links below for the resources mentioned today, whether you officially sign up for Veganuary of not (and I recommend you do!) there is such an abundance of useful info and plant based deliciousness via veganuary.com. As with any lifestyle change. I strongly recommend you encourage friends or family members to give it a whirl with you as it makes it so much easier and more fun.

The holiday season is the perfect time to try new recipes out on each other, and of course to impress impress your non-vegan friends with your recipe wins!

Sign up with Veganuary today and start your vegan journey! https://veganuary.com/try-vegan/

That’s it for today in Healthification however before you go – as you listen to this, fingers crossed my NEW PODCAST all about rockin a #plantstrong lifestyle focusing purely on the POSITIVES should be live!

To get plant positive with me, simply search Plant Positive wherever you listen to podcasts!

If you like the show (either show!) now is the time to rate, review, subscribe and share because there is only one chance for any new show to hit New and Noteworthy and WOW, I want more plant strong representation in the health, fitness and nutrition categories so much! If you do too, then this is your chance to help make it happen!

If you liked “Veganuary and How To Make The Transition To Veganism As Easy and Enjoyable As Possible With Toni Vernelli. .” you’ll also like PETA’s Ingrid Newkirk | Animals Are Not Ours To Experiment On, Eat, Wear, Use For Entertainment or Abuse In Any Other Way

If you liked “Veganuary and How To Make The Transition To Veganism As Easy and Enjoyable As Possible With Toni Vernelli. .” you’ll also like Interview with Keith Burgeson from PETA’s Vegan Mentor Program

If you liked “Veganuary and How To Make The Transition To Veganism As Easy and Enjoyable As Possible With Toni Vernelli. .” you’ll also like My Mums Plant Based Journey, How To Transition To Plant Based Without Restriction Or Conflict!

If you liked “Veganuary and How To Make The Transition To Veganism As Easy and Enjoyable As Possible With Toni Vernelli. .” you’ll also like No Fuss Vegan / The Advice I’m Giving My Mum!