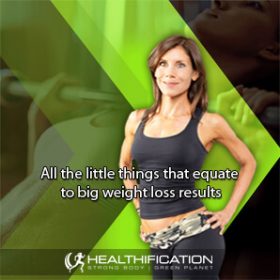 My dad has a very dear friend… we call him Gerald the Genius (!) who is a proponent of “the unimportant is important.”

All the little things. The ‘seemingly’ insignificant.

There are so many little things that you know you could (should) do on a daily basis.  It’d be hard to track them all though right?  And it’d mean sticking with them long term, that’s a lot of effort.

WOW isn’t it just easier to look for that big, game changing ‘this is my solution’ thing instead?  That BIG-quick-fix, that will save the day and make everything better?

Yes.  It sounds kind of stupid put like that!  However I absolutely admit to doing this – ignoring the important (tedious) little things in a never-ending hunt for… for what?

The One Big Thing Solution does not exist – and the power is in the little things.

As Albert E. N. Gray revealed in his classic address ‘The Common Denominator of Success’ the secret of success of every person who has ever been successful is that

“They formed the habit of doing the things that failures don’t like to do”.

One such little thing is incidental exercise.

Year by year our desire to ‘get more done’ and be more efficient has also led to us getting more lazy… less mobile and fatter.  It’s whittled away at the activity our ancestors (ok, likely even our parents!) used to do as a matter of course.

Now we justify what should be common place movement as actual exercise that counts towards our weight loss goal:

“I carried a lot of shopping bags all afternoon yesterday.”

“We walked to the cafe this morning.”

“I cleaned the house. walked the dog. washed the car.”

We expect a couple of training sessions to get a result when 20+ hours a day we’re sitting on our butts or sleeping.

Rain, is a valid excuse to quit an intended walk or run.  Really, have we become that pampered?

And do you even clean your house, walk your dog or wash your car?  Zero judgement if you don’t – I respect and 100% agree with the decision to spend your time doing what you are most skilled at and pay someone else to take care of the things that are a less valuable use of your time… HOWEVER, does it mean you’re switching physical activities for more and more desk bound sedentary activities???

It’s a vicious cycle because the less you move the less energy you have to move.

You may even convince yourself you don’t have time.  Yet, how many hours do you spend sitting in your car or slumped on the couch?  (more time than I spend walking to and from work I’m guessing).

Today I want to share with you that as someone who moves a lot, I know the more active I am the easier it is to stay active.  If you’re not there right now, you have experienced this in the past right… at least a glimpse of it?

If I skip some exercise I start getting a bit achey, and lethargic… often downright grumpy and Yes, even lazy.  The easiest thing is to just keep going with all the little incidental exercise opportunities.  Of course there are days when it’s the less appealing option.

At those times when that little self negotiation reel starts to roll, I remind myself;

Don’t start making excuses because where will you stop?

Excuses have a momentum.  One will generally lead to another.  And with each additional excuse you’re guaranteeing yourself a tougher time of putting a stop to the onslaught as your clever mind comes up with reason after reason to justify the easy-excuse-option.

You can talk yourself into anything.

Back to incidental exercise.  Just how much has changed?

In 2004 research was undertaken by David Bassett and colleagues at the University of Tennessee on a community of Old Order Amish to determine the impact of technology on physical activity.  This community do not drive or use electrical appliances and choose to use the same farming techniques used by their great grandfathers.

What is a good target to aim for?

10,000 steps a day gets thrown around a lot.  To track it you’d need a pedometer.  For my Aussie friends please don’t get complacent, as incidental exercise is merely one of the little things to be incorporated on a daily basis… and I think 10,000 is truly just a start, once you factor in the easily available massive serving sizes and high caloric density meals we now negotiate multiple times a day.

Here in stunning Sydney’s eastern beaches I’ve been told I’m know as ‘The Walker’…I’ve definitely had worse (AND better!) nick-names however it does prove how unusual just walking has become… apparently I’m ‘always walking’.

I walk 20 minutes to work and from work 6 days.

Weigh up your current weekly commuting time and any cardiovascular based exercise you do and my total is really not that much time.

(audio version also available – for while you walk! – I LOVED it)

“Exercise increases oxygen flow into the brain, which reduces brain-bound free radicals…an increase in oxygen is always accompanied by an uptick in mental sharpness”

“Exercise acts directly on the molecular machinery of the brain itself.  It increases neurons’ creation, survival and resistance to damage and stress”.

Time to stop myself from racing down the exercise and brain power rabbit hole, that’s a whole other post.  Let’s make this implementable.

What are three little things that you could form the habit of doing that will propel your weight loss success?

Increasing your incidental exercise by 20-40 minutes a day might be one.

It’d be easy to throw a few more suggestions your way however it’d be a lot more fun to hear your ideas?