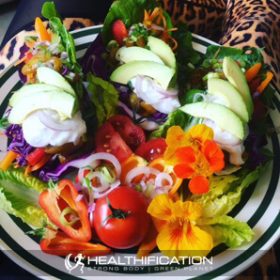 Since adopting a 100% plant based diet almost two years ago I’ve become a lot more flexible (and generous!) so far as the carbs I eat.

If you subscribe to one of the Biggest Health Mythes that I used to propagate you might be surprised to hear that eating more carbs has not had any detrimental impact of my health or body composition. In fact there’s really been no change… aside of course from a little extra joyous carb demolishing!

In todays show, part two of the Biggest Health Mythes Of 2017,

Now to be clear I’m still super mindful of the carbs I consume and the carbs I recommend my clients consume.

Zero value processed refined carbs certainly can make you fat. And zap your energy. And fuel a vicious, addictive carb-o-la crap-o-la cycle. However so far as primarily one ingredient carbs like fruit, legumes and starchy veg… my firm belief now is that the super vast majority of us need never see these carbs as something to be feared or avoided.

I’m going include an underlying Biggest Health Myth flavour into each of the 3 mythes today and so far as carbs make you fat?

It’s now my belief this is peddled by the: When it seems too good to be true, marketers.

Perhaps, Fruit, veg and grains are making you fat… how about eating unlimited animal protein and fat instead?!

As I mentioned in part one of the Biggest Health Mythes Of 2017, as consumers we are each only too eager to believe what we want to believe. Swapping fruit or grains for bacon and eggs is an easy sell to a lot of people.

As consumers we’ve been conditioned to judge a food more by it’s caloric content rather than it’s nutritional value. Less calories and bigger quantities is again an easy sell however what about the valuable micronutrients we should be looking to fuel our bodies with?

To escape the Carbs Make You Fat myth and successfully evade other ‘when it seems too good to be true’ ideas being marketed, here are 3 keys.

A) Awareness of WHY you’re eating what you’re eating.I’d hazard to guess the why behind seeking out an entire tub of diet ice cream to demolish in one sitting is not that: it’s meal time and your body deserves decent fuel! It’s more likely a reward, procrastination technique or easy indulgence to help you cope with / avoid something that needs to be dealt with. And what’s the harm right? The marketing declares this ice cream has (insert useless percentage) less fat / sugar / calories then the regular stuff!

Five: Milk Is Essential… and the best source of Calcium.

This is one of the most entrenched mythes I’ve ever come up against.

Now, (though a decade ago I certainly did not think this way) I find it hard to fathom how tightly many humans cling to their self proclaimed right to drink the milk from another animals mum. To forcibly impregnate that mum to be, to steal and slaughter her baby on it’s first day of life and to greedily guzzle ‘baby calf growth fuel’ that has been perfectly created to grow a calf from around 80 pounds at birth to around 1500 – 2000 pounds at just 2 years old. And then to complain about how easily they put on fat!

Please know I’m not coming from a place of judgement. More so, I’m speaking from equal parts frustration at myself for my past milk, cheese and yoghurt guzzling days. And also dismay (fury!) at the underlying idea of Biggest Health Myth number five: When the marketing is too fierce.

I’m not going to go to science’y as it’s certainly not my forte however so far as ‘essential’ and ‘best’ source of calcium here are just a few of the numerous plant based calcium sources to enjoy instead of baby calf growth fuel loaded with another animals hormones: fortified almond, hemp or other non dairy milk, kale, collard greens, broccoli, dates, blackberries, tempeh, soy / navy / adzuki beans, tahini, almond butter and sesame seeds.

To dig in with ‘a little more science’y’ I hugely recommend the videos on nutrittionfacts.org such as:

Why Is Milk Consumption Associated with More Bone Fractures? and,

To escape the Milk Is Essential… and the best source of Calcium myth and successfully evade other ‘when the marketing is too fierce’ ideas being marketed, here are 3 keys.

A) Awareness of WHAT you’re eating and the entire process behind WHAT you’re eating. The marketing you’re subjected to insists you need milk for bone health. It portrays a nutritious, pure liquid straight from nature to you gifted freely by happy cows luxuriating in abundant green pastures. And yet, the reality involves enslaved sentient beings who live either one day (if a baby boy calf) or 20% of their natural live if a milk producing mum. That nutritious, pure liquid also involves feces, blood and pus.

Six: Taking Medication For The Rest Of Your Life Is Normal… and to be expected / accepted.

It literally blows my mind how thoroughly we’ve been conditioned to seek the easy pill popping quick fix. Absolutely modern medicine has it’s super valuable and very necessary place. However not unquestioned and not as a stand alone response. The part food has to play in preventing and reversing our deadliest diseases is now beyond doubt.

Yet changing your diet can seem extreme. We still live in a time where it’s normal to be on various medications and extreme to NOT eat the flesh and excretions of other sentient beings. It’ll change. It is changing. Veganism is the fastest growing social justice movement globally however it’s not just about social justice and doing right by the animals, the planet and millions of starving humans. It’s also about your health.

In recent months 3 of my most health conscious clients have adopted a plant based lifestyle. None of them have gone straight to 100% plant based and that’s actually my recommendation. Less extreme and more manageable is to just cut out the animal products that you most feel guilty or worried or squeamish about. Perhaps that’s red meat. For me – if I had my time again – it’d be dairy. It’s as cruel as meat and in my mind absolutely rubbish fuel. Next you might want to sort one meal, so maybe lunches. Then the next easiest meal… and then your eating out strategies. It’s simply a matter of moving at a pace that works for you, because everything counts and I guarantee you’ll find it both easier than you expected and easier with every single passing day.

To escape the Taking Medication For The Rest Of Your Life Is Normal… and to be expected / accepted myth and successfully evade other ‘when it’s dichotomies black or white… and societies norm’ ideas being marketed, here are 3 keys.

As I mentioned in part one of Biggest Health Mythes Of 2017 I hugely recommend you gather your information so far as these health mythes and plant based eating in general from a broad variety of sources…. and when you are then able to make an informed decision: Listen to your heart.

Until then, I’d love to hear from you. Do you disagree with one of my stated mythes? Or are you in agreement however it’s still a struggle to break from old habits? To recap we covered:

Biggest Health Mythes Of 2017 one: You Need To Consume Animal Products To Be Healthy.

Biggest Health Mythes Of 2017 two: Protein Deficiency Is A Thing.

Biggest Health Mythes Of 2017 three: Fish Is Essential… and Healthy.

Biggest Health Mythes Of 2017 five: Milk Is Essential… and the best source of Calcium.

Biggest Health Mythes Of 2017 six: Taking Medication For The Rest Of Your Life Is Normal… and to be expected / accepted.

That’s it for this week in Healthification. Huge thank you across the pod waves to YOU for sharing this week with me.

The Healthification podcast is proudly bought to you by my FREE ‘Easy Vegan’ plan. It took me 25 years to transition from a meat eater to a happy, healthy, non-judgemental Vegan! You can do it in just 3 days with  my simplified ‘easy vegan’ plan!  Get the fit, strong, and healthy plant based body you deserve… while avoiding ALL the mistakes I made along the way!