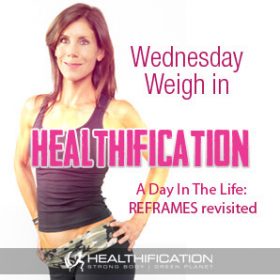 A friend of mine posted a ‘feeling amused’ Facebook status update today… it illustrates todays weigh-in subject perfectly and it is amusing so I thought I’d share it with you:

“Came home from a long day at the gym to discover that someone stole my bike from outside my apartment block where I’d parked it. I’m feeling slightly disappointed that this has happened but also amused. I recently crashed the bike into the side of a car and it was a death trap to ride… So I’m pretty sure that karma will catch up on the thief quickly. Enjoy the ride and hope you don’t fall too hard!!!”

Today’s show covers: REFRAMES revisited, however I’m going to share it in A Day In The Life or ‘choose your own adventure’ format.

I first covered reframes in the #031 show. They are one of my favourite tools to help ensure I make the best decisions and also to help make every day as enjoyable as possible.

So basically using reframes can make you more effective and mean your day is more fun.

The way I see it each decision you make will naturally build on itself… for better or worse, however thankfully you can also put a stop to this path of least resistance momentum at any single decision if you realise your day is heading towards an UNhappy ending.

Let’s start with when you wake up after a less than sound nights sleep. The alarm has blasted you out of a slightly unnerving dream and straight into your jam-packed-stress-filled-Monday reality.

Day in the lifer One) and let’s for the purpose of todays show think of One) as: one excuse after the next is pining over the weekend that was. Wishing she could do it again. Feeling short-changed that it went so fast. Resenting the need to get up and get going.

In fact miss one excuse after the next is feeling so sorry for herself that it seems plausible to hit that snooze for just an extra 10 minutes, skip that tedious 30 minute walk to work and catch the bus instead.

In the flat next door lives Day in the lifer Two) and let’s for the purpose of todays show think of Two) as: too focused on her goal to be distracted is also feeling like a little more sleep would be pretty awesome.

However miss too focused on her goal to be distracted knows there is stuff to get done today and she can either do it and feel satisfied at the end of the day or skip it and feel rubbish.

Rather than wishing for a time machine miss two appreciates the weekend she just enjoyed and is grateful she has a job to get up and go to. She sees her 30 minutes walk to work as a chance to prove how committed she is to achieving her body gain goal and also an opportunity to catch up on her fav podcast!

Let’s check back in with miss one excuse after the next at the first little hiccup in her day.

Actually there’s probably been numerous hiccups as miss one is intent of focusing on ALL that is bad however let’s skip straight to her lunch time weights training session.

She’s proud of herself for getting to the gym… that’s half the battle right? It’s time for her weekly weigh-in and you guessed it… frustratingly the number on the scales has GONE UP!

Miss one’s reaction is something along the lines of: “Why do I even bother! I never lose weight. It’s really not worth the effort… my genetics, my carb-loving-boyfriend, my skinny-eat-what-they-want-girlfriends make it impossible, I guess I’m just meant to be fat.”

The one excuse after the next approach is to drag her feet through a lack-luster-low-effort training session and console herself with a hearty meat-ball-sub instead of the tuna salad she bought from home for lunch.

Meanwhile miss too focused on her goal to be distracted has also just discovered that pesky little number on the scales have gone up, even though it’s been a week of great food and exercise.

Miss two’s gut reaction is disappointment. And then she consciously decides to reframe the situation:

=> it’s a chance to further refine her training and make a few more upgrades to her eating.

=> it’s credit in the bank so far as the results for her efforts she knows are coming her way. If not this week then next… if not next week then the week after… at some point as long as she continues taking the right actions THE RESULTS WILL COME.

=> it’s feedback that skipping her long weekend walk was not a great strategy – lesson learnt she’ll make it happen this week.

=> it’s time to start focusing on how much fitter and stronger she’s feeling and how much better her clothes are fitting rather than that at times misleading number on the scales.

As the day draws to a close miss one excuse after the next arrives home exhausted and ready for some quality telly time. For sure, she’d eat some fish and veg if someone could just cook if for her however really she’s not up for kitchen time after that day – and what difference does it make anyway?

Miss one has checked out with a bottle of vino, a bag of chips and some trashy T.V. Destined to repeat the same one excuse after the next cycle tomorrow.

Collapsing onto her couch in the flat next miss too focused on her goal to be distracted is pretty damn exhausted too. The fridge could be looking a little more full however there’s enough to pull together a proper meal. Miss too chuckles because she sounds like her mum “proper meal” (!) however she knows one lazy, self indulgent “I can’t be bothered meal” will very likely build on itself and turn into a habit.

That’s the super cool thing with the reframe. Like a belief it doesn’t have to be true or right or factual… it’s there to get you to take the right action or to help you feel better.

If miss two choose’s to see one lazy meal as the start of a downward spiral and that means she chooses a proper meal instead then the reframe has done it’s job.

If you see a knee injury as the opportunity to get more upper body and core training done then the reframe has done it’s job.

If my girlfriend see’s her stolen bike as an amusing lesson in karma that will catch up with the thief then yep, the reframe has done it’s job.

To get actionable today, is there a part of your daily routine in which you’re sometimes a little miss (or Mr!) one excuse after the next? A time when a creative reframe is going to either get you to take the better action OR help you feel better and move on?

That’s it for today… in tomorrows Thursday Training show it’s my: Fav Work-out This Week #5.

If you liked this you’ll also like: A Day In The Life Of An Effective Fat Loss Mindset.