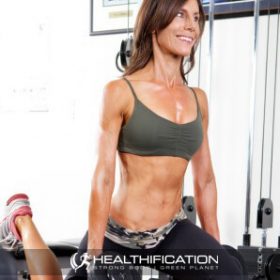 Forget sit-ups and crunches, in todays training show I’ll explain how to sleep, drink and plan your belly fat right out of your life.

Loosing belly fat is probably the most common body request I hear.

Everyone wants to know the best exercises to get a flat belly or sculpt a 6-pack. Although I do have a couple of favourites – and I’ll share them with you today – generally I only include them in my training for fun. Or for a rest between heavy weighted exercises.

I actually went for months and months at one point without doing any specific core exercises… and I still had a 6-pack, that’s because the exercises you need to do to sculpt that stomach are not what you think.

The flat belly belongs to the clean eater with an overall lower body fat%.

Here are 5 ‘exercises‘ to prioritise:

1) Exercise the proper prior planning to ensure you eat 3-5 nutritious meals each day.

Why?  As chronic dieters already know eating infrequently leads to a snail-like metabolism.  It triggers your bodies ‘starvation response’ where even if you have excess fat stores your metabolism will slow down and conserve energy as it doesn’t know when you’re going to feed it again.  Eating frequent meals will train your body to burn through the fuel you regularly feed it and has as much impact on increasing your metabolism as exercising regularly.  If your meals are planned you will also be able to utilize the thermic effect of food, that’s how much energy your body uses just to metabolize the food – PROTEIN IS THE HIGHEST at up to 30% – rather than getting irrationally over-hungry and grabbing something that takes little energy to metabolise AND is easily stored as fat.

2) Exorcise fake, processed, nutrition-less food from your home and work.

For example: Fake and processed = pretty much anywhere there is an ingredient listed that you don’t know… especially in all those ‘diet’ and ‘low fat’ options that are promoted as being the ‘healthy choice’.

Why?  Aside from the aforementioned LOW THERMIC EFFECT & Zero Nutritional Value that leaves your mind screaming at your stomach to eat more (read cravings and hunger) after it’s left unsatisfied by food that’s been assembly line injected with man made chemicals and preservatives… beyond that nastiness, a couple of these additives interfere with the hormone leptin which is responsible for sending a signal from your stomach to your brain to tell you you’re full – ever ‘know’ that you ‘should’ be full but keep eating and eating anyway?  Further fake food additives boost fat-storing hormone insulin levels while cunningly simultaneously blocking fat-burning hormone glucagon.

It is no co-incident that ALL of the people you see sporting a chiseled middle consume clean, natural, unprocessed food – especially one ingredient wonder foods like fibrous veg, fish, meat and eggs – the stuff that our hunter gatherer predecessors would recognize, rather than the crap-o-la that could probably have been stored since prehistoric times without ‘going off’!

3) When exercising your bicep via a repetitive curl of glass to mouth make the low carb choice and only consume low carb, high protein food.

For example: Pure Blonde over full carb beer / vodka soda or mineral with fresh lime over lemonade and any syrupy mixers or juicy/creamy cocktails.  Fish and veggies or Steak and salad over wedges or pasta.

Why?  As you may know by now – my approach to health is about Lifestyle not ‘silver bullet’ and it’s important to pick your treats and incorporate them into a sustainable routine.  If you choose to include alcohol then there’s a way to do it without sacrificing your results.  As alcohol is a toxin your body will look to metabolize it as a priority over anything else you’re consuming – SO THIS IS ABOUT THE WORST TIME TO CONSUME CARBS & FAT – as it is prime time for them to get converted to fat rather than used as energy.  It’s also important to consider the high’ish calorie count of alcohol – at 7 calories per gram…it does have a significant Thermic Effect too at around 20%, however given how easy it can be to consume it there is definitely no need for added ‘nutrition-less’ calories in the form of mixers.

4) In your weights routine choose unsupported big compound movements which involve multiple joints and multiple muscles and require strong support from your deeper abdominal muscles during the entire movement.

For example: Lunges, Squats, Deedlifts are the lower bod hard hitters… even for the smaller muscle group exercises (if fat loss is your primary goal) you’ll get more bang for your buck by choosing a standing Dumbbell shoulder press or good old push up over your overly supported, range-of-motion guided machine versions.

Why?  The harder your body has to work during your work-out the more calories you’re going to burn, both during the session – AND ALSO AFTER THE SESSION. Training at a high intensity, be it via the weight, the type of movement or the lack of rest is going to have the greatest value by way of EPOC (Excess Post exercise Oxygen Consumption)… that’s the ‘after burn’ where you continue to burn calories after you stop training, for UP TO 36 HOURS!

5) Make adequate sleep (6.5 – 9 hours) and de-stressing an integral part of your exercise regime as without both the stress hormone cortisol can get out of whack and it’s main job is to rob your belly of it’s flat desires and reinstall those unsightly tires.

Why?  Cortisol is a fat storing hormone, specifically it’s game is to direct fat straight to your abdominal area for storage.  Cortisol can become a problem when your mind is out of balance as a result of mental, physical and emotional stress such as when you’re not getting enough sleep, over-training or you’re burning the candle both ends with work and home commitments.  Since stress is an inescapable component of life, the key is to actively plan and choose your positive stress eroding strategies and to employ these tactics at the first hint of stress showing up.

So there you have it – to ‘bulk up’ your belly (read: build muscle hidden UNDER a stubborn layer of fat) – some heavy ‘weighted’ sit-ups are the way… Most likely that is NOT your goal though.

The highest flat belly return exercise is without doubt #2… that’s where you exorcise the crap-o-la from your house and replace it with one ingredient foods.

If you don’t believe me I’m sure you know the skinny fat chick with a wobbly belly?  This is the girl who is either naturally lean even though she’s eats rubbish or perhaps she’s a cardio queen who spends hours trying to exercise away the processed foods she eats in super restrictive quantities.  You can absolutely get skinny via this UNfun method however you can’t get a sculpted stomach.  Your stomach is the true sign of the quality of the food you feed it.

Before we finish for today, I have’t forgotten the core exercises I promised at the top of the show.

I have 2 favourites; prone holds and hanging leg raises and roll-outs are at least as effective as these 2 however I hate them all so I don’t do them!  The couple that make it into my weekly routine are:

One: A Side Plank with Hip Dip and Toe Tap.

=> It’s not as boring as your regular prone/plank hold as there’s some movement involved – and it’s awesome for your obliques as well as your deeper abdominal muscles.  Assume a side plank position with the arm that is supporting your body aligned so that your elbow is under your shoulder and your forearm is at 90 degrees.  Start with the free/top hand on your head and then tap that elbow to your top knee (move the hand slightly from your head rather than over-flexing your neck.

Now replace hand to head and dip your hip to ground.  Now come back into the plank position and tap your hand to your toe.

That’s one repetition. Aim for 6-12 reps each side.

=> Again I think leg lowers are awesome yet boring… and the addition of a ball brings in a little inner thigh love.

Lie on your back on a bench with your hands holding onto the bench behind your head. This is a combo of first a double leg lower (which is hard – you need to be able to do it on it’s own first while maintaining your back pushed down into the bench not arching up and momentum’ing through.) After the lower do a reverse crunch in which you drive your heels up towards the ceiling lifting your hips up off the bench. Once you’ve mastered the combo you can do it with a ball (I use a 2kilo ball) held between your knees.  Hold tight – you don’t want to drop that thing on your face.  Slow and controlled is the focus here.

Aim for 12 reps… and let me know if it gets you some bemused looks at the gym as that’s been my experience!

That’s it for today – tomorrow I’ll be back to discuss What To Do When You Feel Like Quitting.

If you liked this you’ll also like: Choosing Your Curves: exercises to tone hips and thighs PLUS lose stubborn belly flab.