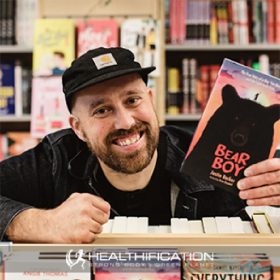 Justin Barker is an animal activist, producer and author of Bear Boy: The True Story of a Boy, Two Bears, and the Fight to Be Free.

At just 13-years-old he launched Citizens Lobbying for Animals in Zoos after being appalled at the conditions he witnessed at the Sacramento Zoo in his home town. Justin then received a letter. I’m sure the lady writing to ask for help for two sibling black bears being kept in horrific conditions at a nearby zoo had no idea she was approaching a child!

However Justin was the right child. He launched a massive media and fund-raising effort, to save Brutus and Ursula from the hell hole they’d been trapped in for 18 years.

Bear Boy, tells both the inspiring, frustrating rollercoaster ride of Justin’s fight for two bears PLUS his personal heartbreaking and heartening coming of age story. The tenacity, focus and resilience young Justin had is incredibly impressive. He has since turned his passion for rescuing zoo animals into a lifetime of advocacy and hopes to “highlight the plight of zoo animals and inspire young people to stand up for themselves, animals and their fellow humans.”

This is a book I loved as an adult though WOW it would have been powerful to read as the insecure, painfully shy young teenager that I was. So it’s a great gift for the budding activist in your life. Or even the child that is not yet sure that their words and actions count.

Bear Boy will inspire the next generation of activists to question the role of animals in our daily lives and to create a kinder, more inclusive world.

So many learnings in that conversation. Justins’ mammoth undertaking and success, proves that one kid can make a big difference.

That no matter the odds if you keep taking the next step you will get there, though as Justin wisely shared, likely not in your expected timeframe. And even if that sounds too idealistic – well first – who if not children to be idealistic AND ALSO you’ve got to try.

A life lived without fighting for what you believe in is not a life I want to live.

Finally, I couldn’t help but draw the correlation between those zoo upgrades made for people – for the viewing public – and the pretty, deceptive  packaging and marketing plastered all over animals products and also made for people.

These upgrades mean nothing to the animals.

To purchase the book or to connect with Justin I have you linked up below.

Purchase Bear Boy The True Story of a Boy, Two Bears, and the Fight to Be Free:

My journey to save Brutus and Ursula was anything but simple, but it was a triumph, not only for the bears and for the cause of animal rights, but for me personally. @justinbarkertv #animalrights Click To Tweet This is a book that will encourage you to follow your dreams, to work hard to achieve a goal no matter how often you are told it is impossible. Dr Jane Goodall @justinbarkertv #bearboy Click To Tweet

If you liked “Justin Barker and Bear Boy The True Story of a Boy, Two Bears, and the Fight to Be Free.” you’ll also like PETA’s Ingrid Newkirk | Animals Are Not Ours To Experiment On, Eat, Wear, Use For Entertainment or Abuse In Any Other Way.

If you liked “Justin Barker and Bear Boy The True Story of a Boy, Two Bears, and the Fight to Be Free.” you’ll also like Catherine Kelaher and NSW Hen Rescue are Creating a Hen Haven!

If you liked “Justin Barker and Bear Boy The True Story of a Boy, Two Bears, and the Fight to Be Free.” you’ll also like Meat The Victims with Animal Activist Leah Doellinger.