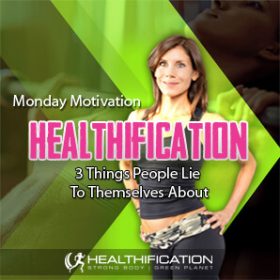 Can you remember the last time someone deceived you with a really big lie?

How did you feel when you found out? I imagine you lost faith in that person instantly. Actually, even small deceptions can gnaw away at your trust in a person. They can even make you question your own judgement. Make you uncertain as to whether you’re overly gullible. Naive. Or perhaps just over eager to assume the best in another person to your own detriment.

So what about when the person lying to you… is YOU?

3 Things People Lie To Themselves About.

Specifically in relation to creating a fit, strong healthy body. These are common lies I pull my clients up on regularly because they will not only reason you out of results they’ll also eat away at your belief in you. You need to know you’re a person you can count on. That you will come through for YOU!

Onwards with lie number one…

One: That you can out exercise your bad diet.

Fitter and fatter is sadly not a lie! The thing is it feels good to be doing something. Now to be clear – I know it doesn’t always feel good to be exercising while you’re exercising… however after? When you’re bathed in both sweat and the glow of your own self righteousness?

That can feel pretty good right?

So good in fact that that you might even convince yourself: “I deserve… “ (and this is where you insert your personal result ruining demolish fest). Zero judgement. I had my favs for years. I’d mindlessly munch through an entire box of Crunchy Nut Cornflake cereal in a sitting. Because eating it straight from the box doesn’t count right?!

The truth is you and your body deserve the awesome fuel that is aligned with all that exercising effort you just expanded.

He was right for the most part.

The solution is to settle on that sustainable amount of exercise both structured (like weights 2-4 times a week) and incidental (like incorporating more walking into every single day as our bodies were built to do) that becomes what you do INDEPENDENT OF rather than in response to / guilt-induced-reaction to (!) your food choices.

Two: That you don’t have enough time.

In with the “not enough time” lie I’ll also throw the “I’ll do it tomorrow” line. We all know time is a matter of priorities rather than scarcity. However it’s still a common, automatic, LAZY lie to tell ourselves.

The truth is that’s never the case. There will always be something more fun, urgent, or seemingly important to do than exercise and food prep. Until of course, your failing health or absolute disgust at not seeing results forces those best eating and exercising actions to become enough of a priority.

The solution is to first admit that:

A) You’ll never have time for everything.

B) You’ll never get results if you can’t consistently prioritise those best eating and exercising actions, and then

C) Bump those those best eating and exercising actions to the top of your list, and

D) Schedule them into non-negotiable spots in your week.

Three: That you’re out of options.

Feeling you’re out of options leaves you languishing without hope. And what’s the point without hope that it can be better?

Thankfully there are a couple of components to the “out of options” lie that can both be maneuvered around. First up, those options you know you have that until now have not worked… have you really truly given them a 100% chance to work? Have you committed fully or perhaps have you held back? Held tight to just a bit of that “I didn’t give it my all” card? Or stubbornly stuck with the secondary gain – or hidden benefit you get to indulge in – as a result of your current actions / inactions?

The solution is to chose an option and give it your best. Commit 100% with the knowledge that either this will work or you can cross it off your list and move on to the next option. Because I believe there’s always another option. Sometimes it might not show up until you’ve opened yourself to the possibility of it existing. If it does’t just show up then you might need to either seek advice or do a totally uninhibited, zero judgement, brain dump (basically just writing down everything in your head onto a A3 sheet of paper) of potential other options.

If you cringe at the seek advice option I can relate! It’s a skill to learn though. I’m very mush still learning. The thing I remind myself is: how good it feels to be asked for advice and be able to contribute – so who am I to deny someone else that opportunity?

So that’s our 3 Things People Lie To Themselves About. However I have a BONUS for you (!) because there’s a fourth thing that I believe many people lie to themselves about in relation to creating a fit, strong healthy body. That there is NOT…

One Diet To Rule Them All!

However in digging in to try and ruffle the feathers of my own deeply held beliefs. In seeking to understand the other side of the argument… the potential benefits to consuming animal products, the potential harm in a purely plant based diet. The science on either side.

In all that research my personal belief remains there IS: One Diet To Rule Them All!

Beyond that, on a purely selfish level I’ve found eating a whole foods plant based diet is the only approach that lets me align my actions with my values.

As we near the end of this week in Healthification, does one of the 3 Things People Lie To Themselves About resonate with YOU?

To recap we covered:

One: That you can out exercise your bad diet.

Two: That you don’t have enough time.

Three: That you’re out of options.

To get actionable today, I’d love to hear from you. What lie have you been selling yourself and what are you going to do to fix it?

I’ll share first: I’ve been lying to myself that I don’t have enough time for a holiday. When really I’m just not making a little time off a priority. It’s 100% doable, as is whatever you may have been craftily convincing yourself you don’t have time for!

That’s it for this week in Healthification.

A super huge thanks to you for your support and for sharing this week with me.

If you’ve enjoyed this show and gotten value out of it I’d super appreciate it if you pop over to iTunes and leave me a review. It helps other people find Healthification and it really does inspire me to power on with the weekly episode

If you liked 3 Things People Lie To Themselves About, you’ll also like:  Smart Simple Fat Loss: Eliminate Limiting Beliefs.